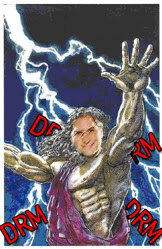 Imagine a world where every online store sells DRM-free music encoded in open licensable formats. In such a world, any player can play music purchased from any store, and any store can sell music which is playable on all players. This is clearly the best alternative for consumers, and Apple would embrace it in a heartbeat. If the big four music companies would license Apple their music without the requirement that it be protected with a DRM, we would switch to selling only DRM-free music on our iTunes store. Every iPod ever made will play this DRM-free music.

Why would the big four music companies agree to let Apple and others distribute their music without using DRM systems to protect it? The simplest answer is because DRMs haven’t worked, and may never work, to halt music piracy. Though the big four music companies require that all their music sold online be protected with DRMs, these same music companies continue to sell billions of CDs a year which contain completely unprotected music. That’s right! No DRM system was ever developed for the CD, so all the music distributed on CDs can be easily uploaded to the Internet, then (illegally) downloaded and played on any computer or player.

In 2006, under 2 billion DRM-protected songs were sold worldwide by online stores, while over 20 billion songs were sold completely DRM-free and unprotected on CDs by the music companies themselves. The music companies sell the vast majority of their music DRM-free, and show no signs of changing this behavior, since the overwhelming majority of their revenues depend on selling CDs which must play in CD players that support no DRM system.